Please welcome author Mickey J Corrigan. She's talking about Happy Endings today. And there are Giveaways! One Kindle copy giveaway of REALLIFE RUM to one commenter! 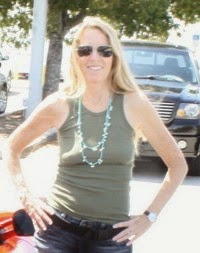 I'm so sick of happy endings I could scream. Why do we want to read books that are so unlike real life? I for one find it refreshing to read a novel that ends badly. With a death, or a bloody ugly divorce. Jail time, unemployment, loneliness, or a dull life in the suburbs. Because those are the real endings to our stories, aren't they?

Why must female characters always end up being rescued by a modern day Prince Charming? Some rich, handsome, successful man who will stay by her side no matter what? My life hasn't turned out like that. Why would I want to read about some chick who gets everything? Does she deserve it more than I do? I think not.

My favorite movies feature anti-heroines who are out for themselves. They may get the guy, then they toss him away. They don't need rescuing, thank you. They know what they want and that is a full independent life. A lover on occasion. But not as the final chapter to their exciting life story.
Movies like that a rare delight. Novels along these lines are equally hard to find.

When I began writing genre romance I had to change the endings for all of my stories. Each time, I had to rewrite my plot so that the protagonist ended up happy, cozy in the arms of her man. I didn't want to end my stories this way, but no publisher would touch them if my protagonist rode off into the sunset by herself.

One publisher rejected one of my stories with a gruff warning. She said to omit a scene in which an unhappily married woman has a brief and torrid affair with a married neighbor. She told me, "Readers hate women who cheat. They won't like your character."

Well then, we readers are missing out on the depth of real life experience if we refuse to read about women who cheat. Or lie. Or take men for all they're worth, then split. I mean, women do this sort of thing. Why wouldn't we want to read about fictional women who are imperfect? Conniving? Selfish? Or just plain bad?

In my new novella RealLife Rum, the protagonist is not what she seems. She wants what she wants. The epilogue is, in my opinion, not necessary to the story. The HEA is there, but I'd rather it weren't.
I'd love to know what you think. 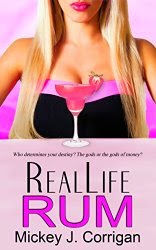 A good rum can mix well with anything.
Marina Winston's like a daiquiri: cold and sweet and a bit tart. Now her life has suddenly turned bitter.
RealLife Rum asks the kind of questions you might ponder after a little too much time spent at your favorite tropical bar. Such as: Who determines your destiny? The gods or the gods of money?
Marina Winston is about to find out. She's been invited by a stranger to Dusky Beach, Florida, and will meet her destiny there. Her fate involves RealLife Shares, a spy who loves her, a pink pistol, and a handsome police officer with eyes like an Alaskan dog. Also a hedge fund owned by a mysterious multimillionaire and a blatant murder. All this has something to do with Marina, but she has no idea what.
Officer Handsome interrogates her—and turns her on. To Marina, the cool cop represents the chance to demonstrate her freedom of choice. And Marina is determined to choose her own destiny.
Buy on Amazon